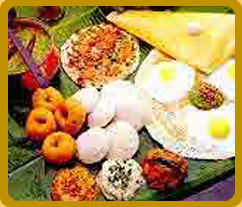 South Indian Cuisine is a term that collectively refers to the food preparation of all the four southern states of India: Andhra Pradesh, Karnataka, Kerala and Tamil Nadu. The southern part of India is famous for its varieties of spices around the world. Some of the main varieties of spices are pepper, cardamom, cloves, cinnamon and nutmeg.

There is historical evidence to show that the southern India was mainly the exporter of spices to many countries like England and France. Inspite of variations in the spiciness of cuisines of all the states, there are certain similarities. Rice is the staple food. It is eaten with sambhar or curry. Coconut and fish is also widely found in South India. To prepare sambhar or chutneys, lentils, spices, chillis and tamarind are the common ingredients. South Indian food is oil and greasy. It is commonly decorated with curry leaves and mustard leaves.

Out of the four states, people of Andhra Pradesh prefer very spicy food. As Hyderabad is the city of Nawabs, the state’s cuisine has a rich touch of royal flavors in its recipes. Some of the delicacies that are even liked by everyone are biryanis and kebabs. Karnataka people prefer a tinge of sweetness in their food. Besides rice, ragi and millet are the staple food items of the state. Karnataka is known as ‘the coffee bowl of India’. People here are fond of coffee. Some of the native dishes of the place are bisi bele bath and saaru.Food preferences of Kerala people are diverse due to its dynamic demographics. The state is dominated by both Hindus and Muslims. Banana chips of Kerala are quite famous. Tamil Nadu is predominantly a vegetarian state. Out of all the four states, it has the most popular cuisine around the world. It is so popular that outsiders generally misinterpret the state’s cuisine as the cuisine of entire Southern India. The cuisine has both spicy and non-spicy dishes.South Indian Food is the culmination of cuisines of four southern states: Andhra Pradesh, Karnataka, Kerala, and Tamil Nadu. Till date, traditional South Indian dishes are popular across different nations. All south Indian dishes are served on banana leaves.

Some of the traditional south Indian dishes, mainly from Tamil Nadu are given below:
• Idli – it is a type of cake prepared from rice or rava. It is light and easy to digest. It is mainly eaten with sambhar and chutney.

• Chutney – There are many varieties of chutneys in this part of the country. Coconut chutney is the most common one. As the name suggests, it is made of coconut and flavored with mustard needs. Tomato chutney is also a favorite with everyone.

• Sambhar – It is a type of dal preparation. It is made of toor dal and flavored with neem leaves.

• Dosa – It is a type of pancake with no stuffing or different stuffing. Dosas can be stuffed with potatoes, or with onion and tomato mash. Dosas are made of rice or ragi. Sambhar is again the main dish served with dosas.

• Upma – Upma is the most common breakfast dish in the southern part of India. As it is easy and quick to prepare, it is a preferred choice in everyone’s lunchboxes. Its main ingredient is sooji, rice or rava. It is mixed with onions, green chillies and mustard seeds.

• Bonda – Bonda is a typical south Indian fried snack stuffed with potatoes or a vegetable mixture. It can be spicy or sweet.

• Dahi Vada – Dahi Vada is a refreshing snack for south Indians. Vadas are generally fried potato balls. They are dipped in cold yogurt, that is, dahi, to make dahi vadas.